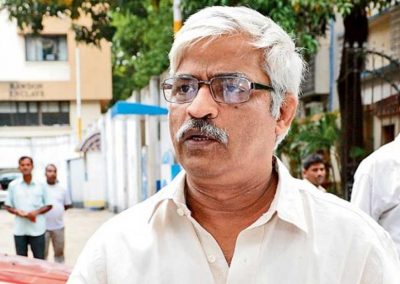 A politician, Pharmaceutical Engineer & Scientist, social worker and philanthropist , Dr. Sujan Chakraborty is the Leader of Left Legislative Parties, West Bengal. He is a member of Central Committee of Communist Party of India (Marxist).

Though he got raised through poverty and hardship, he never let it to become a hindrance in his education rather from the early school life , Sujan distinguished himself as a meritorious one. He completed his Graduation (B.Pharm) with First Class and later obtained the Masters’ degree(M.Pharm) from Jadavpur University. Sujan received the doctorate degree for his significant research on the terminal disease of cancer. In spite of an assured professional career that held the lure of many comforts and luxuries of the so called affluent living, Sujan chose to take the plunge for his ideal.

He is also a recipient of several awards that include Acharya Prafulla Chandra Roy Gold Medal for the year 1999-2000 by the University Grants Commission for outstanding contribution to Science.

Sujan chose to build himself up as a committed soldier of the students’ movement from school days. He involved himself with various social awareness programs including literacy and science from his school days. He lent a strong leadership against the anarchy in the education system during his student life of unrest Bengal and fought against rowdyism in the education sector. He got actively involved in Student’s Federation of India. He became the Secretary of the SFI South 24 Parganas unit in 1985, State Secretary of SFI in 1988 and its All India General Secretary in the year 1993. In 1994, he attended the International Solidarity Convention for Cuba.

He was elected Member of the West Bengal Legislative Assembly in the year 1998 from the Baruipur constituency.

Sujan became the Secretary of the South 24 Parganas District Committee of the CPI(M) in 2010 and a member of the Party’s State Secretariat in the year 2012. Later, in 2018, he became the central committee member of CPI(M).